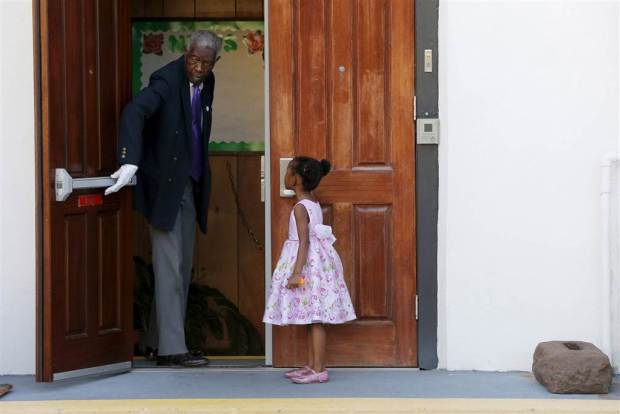 Since the horrific events in Charleston, countless millions of words have been written and spoken, and a river of tears shed as we fear that, once again, an historic evil has reared its head, a dragon that apparently cannot be slain.

But that is an illusion.  We have made staggering progress, just in the course of my lifetime. But there is also much left to be done, and this is one of those moments in history when action can have real and lasting effect.

It is our 9/11 moment.  And we must not squander the goodwill now pouring from every loving heart by attacking the wrong targets.  Or using the wrong weapons.  Or, heaven forbid, by doing nothing.  But what can we do…?

#1 – The first step is to be safe.  You cannot come from love when you feel unsafe, and that is precisely what is called for.   So start with your own heart.  If you are dealing with massive fear, stress, or anger, every hour on the hour take a one-minute “breathing break.”  Listen to your heartbeat for 15 minutes every morning, and visualize a child-self within you that you are committed to protecting.  Fill yourself with love.

#2 – After you fill your heart with love, give from that overflow.  Begin with your family. Neighbors.  Friends.  Then…let that circle of compassion and connection spread outward.  Make a special effort to extend your own humanity to others, especially those across color or political lines. This is what knits us together as a culture. The denial that the Charleston Massacre was racially motivated is one of the purest examples of fear in motion I’ve ever seen.  There is mortal terror, shame and guilt: IF it is true that America has actually perpetrated such evils, what then?  What of our souls? What of our lives?  The only answer is love–while not taking any crap at all.   I am willing to close the door on the sins of the past, but not if those sins are still with us, and still being denied.  You can mug me, knock me down, even piss on me.   But do NOT tell me that I am to fault for being broke, broken, and stinking. The mugging is just greed, dishonesty and dehumanization. The denial is evil personified.

#3 – Remember that violence comes from anger, and anger comes from fear. Ask yourself what fear the aggressor is experiencing, and you are giving them your own humanity.   Racists, looters, political liars and manipulators…they can cause damage, yes, but they are acting from fear, not simple evil.   Remove the fear, and the anger and violence collapses.  All the remains is love.  And love, therefore, IF ACCOMPANIED BY STRENGTH, is the most powerful tactic of all, and the thing most feared by evil.

#4 – Your tactic: announce clearly and without waffling that you believe in human equality, and that you believe a pervasive pattern of anti-black racism has existed in this country for centuries, and that it contributes mightily to  the disproportionate violence we now see.  Engage in conversation about it: but EXCLUDE from that conversation anyone who will not clearly agree with the previous statement.  No waffling.  Be sure to exclude anyone who wants to demonize either whites OR blacks.  Most of this is just…human fear, not genuine evil.  Exclude the people who still want to argue about whether or not the racism exists as a pattern.  Be aware that people will use weasel words or sleight-of-mouth patterns to avoid a clear statement.  They may be wonderful people, but they are not comrades in this journey.  Many of them will be wounded, afraid, dealing with conflicting values or beliefs.  Believe that we can move past this, but it requires focus over time. There are many other issues in the world.  Deal with all of them that you have the heart to do.  But while dealing with this, do NOT allow yourself to be deflected, diluted or “derailed.” Remember that some of the derailment is personal passion. But some of it is deliberate tactical diversion.  Don’t let them slow the train down.  Avoid the “is it racism?” or denial people.  They are compulsively, pathologically, from mortal terror, trying to block the conversation from rising to the next level: “What to do?” because they are afraid that the answer will be “Kill the white people.”  Your answer must be loving, but firm: “That conversation is tomorrow, and down the hall.  Today, and here, we discuss this.

# 5 – The conversation “What to do?” must be conducted from twin Yin-Yang perspectives: come from love. ANYONE willing to make a clear statement that they believe the pattern of oppression is real, that human groups are basically equal, is de facto a comrade.  Even if they take no other action. We must NEVER use the weapon of the enemy: fear, lies, blanket condemnation, prejudice. Hate.  Evil LOVES when good people use bad tactics. Both black and white supremacists are two sides of the same coin.  Put them in a room and lock the door.

#6 – On the other hand, you must also come from STRENGTH.  Be a fighter.  If you aren’t, find someone who is, and ally yourself with him or her.  Love and support them. The warriors give their souls to support the village.  Show them that they are FAMILY.  But take no shit from the sleeping, the ignorant, and the smiling monsters.  Draw the line.

#7 – This situation requires awake, adult human beings.  After 9/11, the United States could have brought the world together.  Instead, we attacked the wrong country and squandered the goodwill.  THIS IS OUR 9/11 MOMENT.  If we come from love AND strength, and insist on being (one of) the awake adults in the room…we can lead the country.   And the world.  Each one teach ten.

#8 – All of this evil we are experiencing, ALL of it, arises from emergent human behaviors: the violence, the control, the fear and anger. The history of humanity says we contain both aspects.  Power does not corrupt, it simply removes the fear of showing who and what you really are.  It brings out what is within you, so you see both very good and very terrible things happening whenever you see someone…or some people…strong enough to impose their will on others. Look at the megafaunal extinctions, as well as the extinctions of other hominids.  Ask the Neanderthals about what happened when the  Cro-magnons who moved next door.  Oh, that’s right: you can’t.

#9 – How would we know that racism is effectively ended?  What is the end game? I suggest four standards: life span, incarceration rates, infant mortality, and inherited wealth.  Each has both intrinsic and extrinsic motivations: damage done from outside, and the resultant dysfunction within the community itself. The outside stuff can be dealt with by others, but the intrinsic ones, the sickness within the black community itself,  are like the self-destructive behavior, the bulimia, cutting, violent fear and morbid obesity of an abused child.  And the community itself must  deal with it.  But this discussion can only happen among people who believe that whites would have been just as screwed up, given the same history.  No waffling allowed. You either take this position, or cannot be a part of the discussion.  And really, if you think we’re crazy, why would you want to be a part of it?  And don’t expect me to walk straight while your knife is still in my back.  (Trust me: I came THAT close to saying something a lot more vulgar there.)

#10 – BE THE CHANGE YOU WANT TO SEE.  You, as an individual, must be the strong, loving, clear-headed spiritual warrior. You must never use the tools of your enemy. Must see your own humanity in the hearts and souls of others. Must grasp how corruptive and chameleon-like fear can be. Must grasp that EVERYTHING we are seeing is just the ugly side of the tribalistic human survival drive. Stand up. Declare clearly that you will not remain silent, and discuss how we can move forward.

I, as a single human being, cannot possibly have the answers. But we, as a tribe, most certainly do. I believe in us, and in you.  Who will stand with me?

Consultants, Coaches and Hypnotists: Get your free copy of a talk that can change your life

is the myth, fiction, art, and science, the cinema and music and dance of the children of the African Diaspora. OCTAVIA BUTLER may have been the greatest literary genius of this movement, Ryan Coogler's upcoming BLACK PANTHER film may be the greatest expression of this in history. He who controls the narrative controls the experience of life.
Join novelist and cultural commentators TANANARIVE DUE and STEVEN BARNES for an amazing, enlightening, totally FREE webinar.

is an exploration of the connection between cultural myth and personal consciousness. The perfect path of career and personal success for writers. Get over a hundred dollars in free gifts for $1 when you try the LIFEWRITING PREMIUM program.